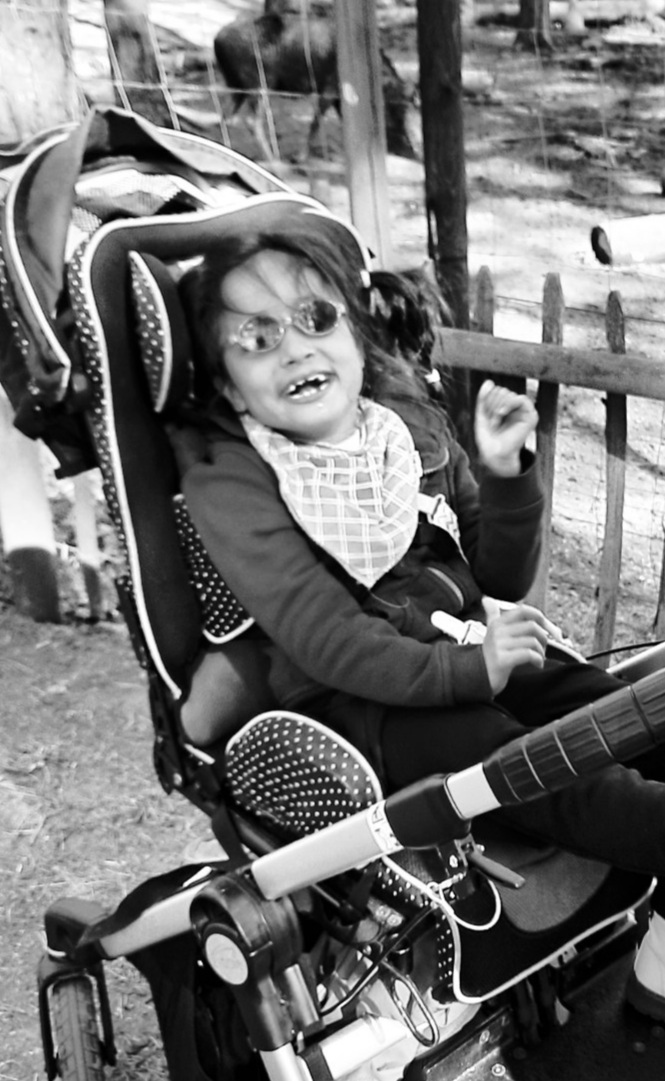 The intention is to fully adapt the bungalow so Ishani can remain in the care of her family all her life and to create an extension for a suite of rooms which Ishani needs so badly now that she is growing fast.

Everything they do is with Ishani’s future and welfare in mind. It is absolutely exhausting, but the love they show as parents is a joy to see. It has been hard as their income has been greatly reduced and Ishani requires so much, but they have saved hard to adapt and extend the bungalow to give Ishani the home she needs and deserves. They were asking for nothing and had self-financed the project until the last weeks brought the building final quotes in which were 50% higher than they had been told to expect. With just weeks to go to commencing the build, there is now an amount in the region of £70,000 shortfall with an expected further 10% costs on materials due to Covid/Brexit cost implications. They are currently trying to raise further finance, but it has been a devastating blow.

Ishani is the happiest child, with the most pleasant nature and everyone loves her. She does, however, have sensory seeking issues and requires constant 24-hour supervision to stop her self-harming. She has no awareness of danger and whilst she is trying to stand her balance issues and seizures make this dangerous for her and she cannot be left alone for a minute.

Whilst Sarah and Jay recently have received some help with her care, she now requires two to one supervision as she is so physically exhausting and intense to manage. She is constantly on the move, be it on the floor, in her chair, or constantly walking on a journey of texture discovery. When Ishani walks the carer(s) must support her balance, as she can easily fall or could have a seizure, and this is not only tiring but bad for the posture! Her sleep is disturbed by her abnormal brain activity, and she will often wake up for several hours in the night. Her parents have regularly been sleep-deprived because of this and are permanently tired. Despite this, they are the first to rally to help a friend in need and are two of the kindest and most intelligent of human beings.

Jay has a high-pressure job, where he tries mainly to work from a home office to step in if an emergency arises, yet he is up at 5 am in order to help Sarah and the overnight carer start the family’s day. The minute he finishes work, he immediately takes over her care until she goes to bed whilst Sarah cares for the new baby. Sarah could no longer carry on teaching (as Ishani could not be left), and she has taken flexible homeworking instead alongside the care of her daughter and the baby. She does this to provide future security for Ishani. There is no ‘Normal’ life for them, it is relentless.

Whilst they have the basic house now to go forward with their plans, without the extension and work they are left without even a bedroom for the new baby (who cannot share with her sister) and need this next stage to provide Ishani with her own bespoke facilities where she will be able to move about freely in her harness, with safe bathing and dignity as she gets older. She is at an age where she is no longer a baby and lifting a wriggling seven-year-old who is determined to break your supportive hold on her and who has no comprehension of the injury she could do herself, can also be physically damaging to her carers. It is also difficult and expensive to buy safe play equipment that is suitable for her.

Only when you have had to deal constantly with the needs of a severely disabled child do you have any comprehension of the relentless emotionally hard and physically back-breaking work involved.

Presently she is outgrowing the equipment that gives her the most freedom and desperately needs a proper soft play area where she can roll about freely and learn to stand on her own and develop her motor skills safely. Currently, half the living room is her soft play area which she occupies with at least one carer, the other half has to be for the rest of the family which restricts the area in which the new toddler can play and any destroys and any chance of privacy for her parents. At all times they have carers (however fabulous they are) within 5 meters, every minute of every day. Please, just take a minute to imagine…

In 2013, Sarah, at 6 months pregnant received the terrible news that their baby girl was dying in the womb and if she was to have any chance of survival, they had to get her out immediately. Sarah was blue-lighted to a specialist hospital in Kent where Ishani was born by cesarean section.

Ishani was under two pounds birth weight and only given hours to live, yet the little fighter held on and eventually started to make progress. Spending 103 days in the hospital, it was so hard for the family by her bedside every day as she started to build her weight. On reaching 5lbs, and just as they were celebrating that she would soon be allowed to come home on oxygen, routine tests revealed the devastating news that Ishani was profoundly deaf. Only days later the pediatrician brought her parents a further body blow that their beautiful little girl had retinopathy of prematurity and they had to blue light them once more to London to operate to save her sight. All this would have been traumatic enough, but Ishani’s conditions (listed below) now include more that only came to light as she progressed through babyhood.

Ishani is the happiest child, with the most pleasant nature and everyone loves her. She does, however, have sensory seeking issues and requires constant 24-hour supervision to stop her self-harming. She has no awareness of danger and whilst she is trying to stand her balance issues and seizures make this dangerous for her and she cannot be left alone for a minute.

Whilst Sarah and Jay more recently have received some help with her care, she now requires two to one supervision as she is so physically exhausting and intense to manage. She is constantly on the move, be it on the floor, in her chair, or constantly walking on a journey of texture discovery. Whilst Ishani now has learned to walk in the last two years, the carer(s) must support her balance which is affected by the Cerebellar Hypoplasia, as she can easily fall or could have a seizure. Her sleep is disturbed by her abnormal brain activity, and she will often wake up for several hours in the night.

The link to the video below tells the story from birth to 12 months. It is a video that Sarah made to celebrate her little miracle’s fight to survive and their pride in Ishani.

Since one year old, Ishani has been in and out of the hospital with various operations and procedures that no child should have to endure. Now at seven, she has come so far, and we are all so very proud of the courage and determination of our little rock star Ishani! All this achievement for a child that they were told wouldn’t grip or sit up. Her favorite occupation is holding your hands and jumping!

Support Now
To fund a bedroom, bathroom and therapy room and adapt the house to give access for Ishani to move about safely.
Step 1: Specify your contribution amount for Funding Ishani’s Forever Home
Project by