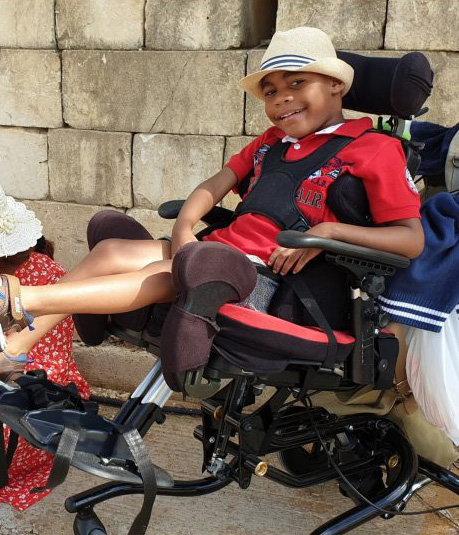 Currently, Tapi is being carried up and down the stairs as both his bathroom and bedroom are upstairs. As Tapi has grown and is quite tall there has been a few near misses on the staircase while trying to get him up and down the stairs. His mum can no-longer carry him without struggle. This has meant Tapi has needed to receive his toileting needs on the floor level air mattress on the floor of the living room when its daytime as it is impossible to carry him up and down the stairs the few times he needs changing. This has completely stripped Tapi off his dignity. It’s also not been an easy task when his brother has had friends come to play or around mealtimes. Additionally, this has meant having to change him while bending over on the floor which over the years has taken a toll on parents’ backs and shoulders as they provide full time care with no other outside help. Bathing Tapi has become a hazard due to the limited space in the current bathroom and with his seizures, the situation is far from being ideal. Access in and out of the house means having to lift his wheelchair which has to be done at least twice everyday to get him in and out of the house. When there is only one adult at home with Tapi it then means he cannot access outside space either to watch his brother play or for his own recreational needs as not possible to then lift him and the wheelchair. When indoors he requires use of both his wheelchair and standing frame. With the set up of the house, it makes any movement difficult and risky to get him on the standing frame and manoeuvre through the doorways. Caring for Tapi is physically, emotionally, and mentally draining and it has left parents with no time for themselves as a couple. Nonetheless, they wouldn’t swap the blessing they have in Tapi neither for gold nor for the world.

Our objective is to completely adapt our existing house so that Tapi can grow in it for the rest of his life together with his family as we continue to care for him. This means bringing down some of the internal and external walls of the existing house to make it more of an open living area. All downstairs doors require widening for easy wheelchair access. Additionally, there will be a new extension to the house containing Tapi’s bedroom, wetroom, sensory room and carer’s bedroom all equipped with a tracking hoist. Front and back ramps will be required as part of the project.

Tapi's parents have worked tirelessly day and night just like any other parents without similar challenges to put food on the table for their sons as well as save for the project. The family saved most of the required money through hard work and got some funds through re-mortgaging to allow Tapi the home he so much needs and deserves. While both parents are nurses, due to Tapi’s complex care needs it has meant significantly reduced working hours and in turn significantly reduced income. Tapi's mum spoke for herself that over the past few years holding a full time job and fit in more extra hours as well as studying, and still care for Tapi on her days off has left her completely burnout that she has found this project to be a driving force to end this kind of life with the much hoped for carers once the project is complete. The family managed to save a pot of money which was initially going to be adequate for what had been quoted by the builders however, due to Covid-19 and Brexit, prices have gone up. Also, there has been extra cost due to delay in starting the project caused by Covid-19 restrictions.

Additionally, having been met with a few other unexpected expenses ie. Flooring, Severn Trent - water supply and heating to name a few. There has been now an estimated total shortfall of about £25,000 to see us complete the project now started and in full swing.

We have been extremely fortunate to be granted the government DFG however, it still left us with a long way to go to fulfil our goal of creating a home which caters for Tapi’s needs and the rest of the family. We have also been blessed and highly favoured by God through Sullivan’s Heroes who have assisted with a grant and have been such great support in assisting set up pages to source out funds from other charities.

Tapi’s care is physically and emotionally challenging. He has complex care needs which can be very demanding. Using the essential equipment for Tapi’s needs within the current space has proven to be a massive challenge over the years and with him growing the situation has not been getting any better with time. The new extension and adaptations to the existing house will make caring for Tapi considerably easier. As he is growing up, this will provide him with the dignity, independence and space any child should have. Without a shadow of doubt, this project will certainly ensure independent living for Tapi once he reaches adulthood.

Having space where we can start having carers come to help with provision of the care needed will be God sent as currently, we have gone for years with sleep deprivation as Tapi requires monitoring throughout the night, and round the clock, 365 days a year due to his daily seizures. The risk and fears of possibly missing his seizures while he is asleep and the risk of Sudden Unexpected Death in Epilepsy (SUDEP) will be made easier by having space for carers who can take over monitoring at night time to allow us rest to rejuvenate.

Tapiwanashe (a Shona name which means “given to us by God”) is an adorable child who is ever happy and content. We call him “Tapi” for short. Tapi is our sunshine, our world and we will be lost and incomplete without him. As parents, he is the reason we wake up each day and face our challenges just to give him a better future in his already challenged world. He gives us the strength and tenacity to carry on. Tapi is a very much-loved member of our family. Born in a family of only 2 boys, he developed such a special firm attachment with his brother. He had Infantile spasms around the age of 7 months. Unfortunately, he received the initial steroidal treatment very late as it was said nothing was wrong with him. There were no issues identified during pregnancy or birth. There has never been a formal diagnosis for Tapi or a known cause for his clinical presentation however, he has a few known things ongoing as listed below:
• Generalised hyperkinetic movement disorder with dyskinesia, ballismus, choreoathetoid and dystonic posturing
• Microcephaly
• Severe Global Developmental Delay
• Epilepsy
• Central Nervous System malformation – Partial sighted
• Enrolled on to the 100,000 Genomes project (no cause yet found but still on the study to try and find answers to his presentation)
• History of Infantile Spasms
• Disturbingly, a recent MRI has shown that Tapi’s brain has supratentorial and infratentorial cortical atrophy which has progressed from the previous scan and this has been consistent with some of his developmental regression.

Now at 7 nearly 8 years of age but with the above ongoing Neuro/Genetic/health issues, Tapi cannot sit, stand, walk or talk, he has difficulties with eating and drinking and cannot feed himself. Tapi has not been able to meet his developmental milestones which has had an impact on his activities of daily living therefore requires 24 hour care. Tapi is known to neurology & genetics and Great Ormond Street Hospital has had some involvement with Tapi’s care.

Tapi relies on a few medications to manage symptoms of all his conditions and again requires adult assistance to administer. Due to Tapi’s immobility, he is prone to muscle wasting, chest infections and constipation hence requires routines of Physiotherapy management plan with the aid of a standing frame and use of hydrotherapy and rebound therapies. He requires specialist equipment to sit. He is unable to meet any of his nutrition and hydration needs, moving and handling needs independently. He is at high risk of choking and aspirating because of his difficulties with chewing and swallowing and has SALT involved in his care. Tapi is unable to communicate verbally and instead we use behavioral cues to communicate. He is unable to meet his own personal care needs, we use specialist bathing equipment supplied by Occupational therapists (OT) to bath and dress him. Tapi has social integration difficulties and due to his sight impairment, he has difficulties with his central and peripheral vision and his ability to process information from what he sees is affected. Tapi’s conditions impacts on his physical, self-help, speech, communication and cognitive skills.

Tapi is a happy child with a gorgeous ‘heart melting’ smile. He has love for people but not so much in toys. He enjoys sensory stimulation and has mastered the skill of rolling and propping himself up with his elbows and keep his head up for short periods of time. He explores his environment through rolling movements on the floor but always requires adult supervision to create a safe boundary for his exploration as he has no awareness of danger and can easily harm himself. The skill of rolling has over the recent years unfortunately seemed to regress. He loves outdoor space and over the years has enjoyed several family holidays abroad. He responds very well to familiar people and can show he is happy to see them. He still appears comfortable with new people and is open to new experiences and activities.